Here is this week’s video! Enjoy.

Chris Cooley’s Blog
Jessica Simpson on David Letterman (The jockstrap/cup part is around the 7 minute marker.)

Studs are guys that totally showed up for work, Duds are those that were expected to have monster games, after which you would barely know they were on the field. 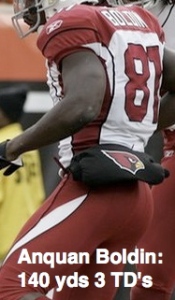 When one player does something exciting (e.g. – a great tackle, a first down, etc.), their celebration often includes some kind of man hug… this could involve a helmet grab, a shoulder or butt pat, or an embrace followed by jumping up and down in unison.
Here are this week’s top man hugs:

Usually found following a score, the typical ceremony involves players jumping up and flying through the air to smack their bodies against each other five feet off the ground. It’s mighty jubilant and I’d totally start doing it with my friends if I didn’t fear I’d be hospitalized as a result.
My favorite body jumps of the week are:

Most commonly occurring after a fumble, multiple men in tights will jump on top of each other in a pile in hopes that when the referees peel them off, they’ll find the bottom guy on their team has possession of the ball. This is usually accompanied by the remaining unpiled players jumping up and down and waving and pointing their hands in the direction of their endzone indicating that in fact their team does have the ball.  Man piles are also often found when an RB attempts a short yardage run into the endzone for  touchdown.
Here are some of the best of the week:

Roscoe Parish! (I cut this down to 1 player a week so I’m not scrambling come the end of the season…)

Have a great week everyone! Touch back with you later!
oxoxo
– jz